What are you looking for ?
skip to main | skip to sidebar
Home » Agile » User Stories 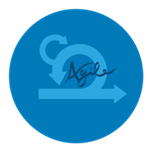 User stories are part of an agile approach that helps shift the focus from writing about requirements to talking about them. All agile user stories include a written sentence or two and, more importantly, a series of conversations about the desired functionality.
What is a user story?
User stories are short, simple descriptions of a feature told from the perspective of the person who desires the new capability, usually a user or customer of the system. They typically follow a simple template:

User stories are often written on index cards or sticky notes, stored in a shoe box, and arranged on walls or tables to facilitate planning and discussion. As such, they strongly shift the focus from writing about features to discussing them. In fact, these discussions are more important than whatever text is written. 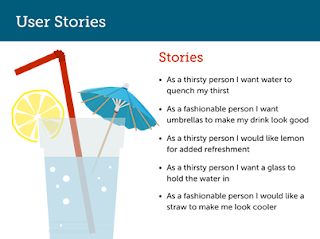 User stories are one of the primary development artifacts for Scrum and Extreme Programming (XP) project teams. A user story is a very high-level definition of a requirement, containing just enough information so that the developers can produce a reasonable estimate of the effort to implement it.


A good way to think about a user story is that it is a reminder to have a conversation with your customer (in XP, project stakeholders are called customers), which is another way to say it's a reminder to do some just-in-time analysis. In short, user stories are very slim and high-level requirements artifacts.


user stories are small, much smaller than other usage requirement artifacts such as use cases or usage scenarios. It's important to recognize that each of the statements represents a single user story.

There are two areas where user stories affect the planning process on agile projects:

Estimating. Developers are responsible for estimating the effort required to implement the things which they will work on, including stories. The implication is that because you can only do so much work in an iteration, the size of the work items (including stories), affect when those work items will be addressed.

Large stories: called epics, would need to be broken up into smaller stories to meet this criteria.
Initiatives: are collections of epics that drive toward a common goal.
Themes: are large focus areas that span the organization.

There are several distinct "phases" agile cycle. There are three common times when stories will be worked on during an agile project: 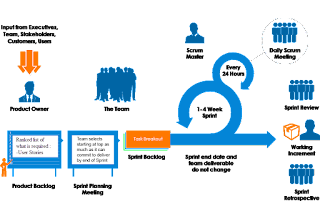 Inception. You often create a stack of user stories during Inception as part of your requirements envisioning activities to identify the scope of your system.

Construction. During construction iterations you will identify new stories, split existing stories when you realize that they're too large to be implemented in single iteration, re prioritize existing stories, or remove stories that are no longer considered to be in scope.

Transition. Sometimes new stories will be identified during the Transition phase,  these stories would be prioritized and placed on the stack in priority order.