What are you looking for ?
skip to main | skip to sidebar
Home » Business Analytics » Biases

Posted by Wael.Medhat Posted on 2:48 pm with No comments
Business Analytics ,
{[['

The human mind is an exceptional problem solving machine.
Our ability to think broadly and make abstract connections in the world around us allows us to interpret nuances in information that are so far beyond the capabilities of machines.
However, we are fallible, and it turns out there's been all sorts of research that's identified very specific ways in which we make mistakes, and there are a lot of them.

Take a look at this diagram categorized by Buster Benson and arranged by JM3.

Each one of these items is a specific way we alter information to deviate from reality. 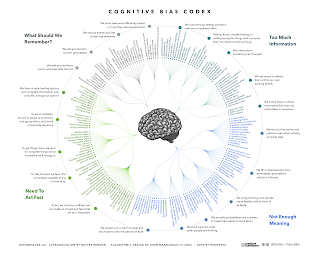 We call these phenomena cognitive biases, and most of us are susceptible to most, if not all, of them.

Cognitive biases can impact the way we look at data and influence our interpretations of analysis.


We will do is look at some of the most common and
potentially damaging biases that play on to our analytical process.
Specifically we'll look at confirmation bias, the framing effect, availability, or vividness bias, anchoring and fundamental attribution error.

Seeking information that matches your belief

There are really two ways that we can exhibit this bias.

The second is by selectively interpreting information. This happens when we only focus on data that supports our hypothesis  even when we have data that refutes it. 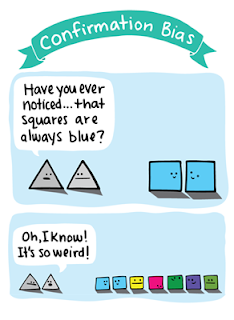 Suppose we feel like our customer care centers are not doing a good job.
We decide to send a survey to a sample of customers that have called in, but exclude customers who have received credits on their bills because these might be customers whose satisfaction has been bought.

This would be an example of selectively seeking out information.

In business there is often pressure to show good results. And this can subconsciously play into how we gather and interpret information.

People can also have strong beliefs about how things should be done, so you tend to go after information that supports their agenda.

As data analysts, we should try our best to remain objective and avoid both of these traps.

The framing effect is the tendency to draw different conclusions from information based on how it's presented.


Which do you think would be the healthier yogurt?
If you take a moment to think about it, both these statements say the same thing. Both yogurts contain 1% fat, and so both are therefore are 99% fat-free. However; when asked which yogurt seems like the healthier option; people are much more likely to show a clear preference for the “99% Fat-Free” option.
Rationally, decision makers should make the same choice in both scenarios but they don't.
It turns out that framing things in a positive way can elicit different results than in framing them in a more negative way.
As data analysts, we need to keep this in mind both as we look at options and make our own conclusions.

As well as how we present options and recommend results to our decision maker.
It turns out there are other ways in which how we are exposed to information influences our thinking. 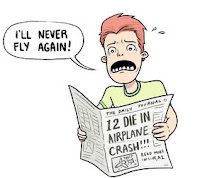 
Is the tendency to believe recent or vivid events are more likely to occur.

There are all sorts of common examples of this, like how people perceive the risk of a plane crash or getting attacked by a shark.
Both events are exceedingly rare, but are often perceived to happen more frequently than they actually do.

In the business context, when will we see this bias impact analysis is when small samples of input highlight touchy topics.

For example, let's say we have a focus group of seven people, and two of them say they have a problem with our product.
This input is vivid. Not only is there a problem but we're hearing about the problem through
a personal and possibly passionate interaction with a customer. It's also two out of seven people.
So we might jump to the conclusion that nearly 30% of our products have issues.
This may or may not be that case. But cognitively we tend to over value these vivid examples.
What's really interesting about this example is not that it happened, these type of analyses are pretty common.

Anchoring is our tendency to focus or rely too heavily on the first piece of information that's available to us. 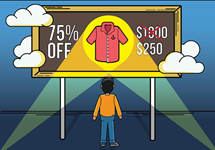 This bias is regularly exploited in areas like pricing and negotiation.
For example, shoppers may respond more favorably to a product that was priced at $1,000 and marked down to $600 than one that was simply listed for $600.This is because the shopper initially anchors at $1,000 and relative to $1,000, $600 seems like a good deal.

Even though we think our methodology is sound, because the estimate is so much higher than the first forecast, we back off some of our assumptions and take the forecast down to a more reasonable 12%. In this case, how we interpreted the second forecast was anchored by our initial forecast.
As analysts, we need to question our analyses.
But it's also important to question why we're questioning our analysis. And make sure we're asking ourselves the right questions. The last cognitive bias we'll discuss is called the fundamental attribution error.

Fundamental attribution error impacts how we interpret things that we observe people doing.
Specifically we have a tendency to focus on attributes or intentions of the person themselves versus the situation or the environment when explaining a person's behavior.

Where this comes into play in analytics is often in the process of translating analytical observations into strategies and tactics for action.
If we misinterpret why and how customers behave, we may end up taking action that is ineffective or counterproductive.

These are only a few of the many ways we as humans are prone to misinterpret information in situations.
If you find this interesting I encourage you to explore some of the other biases we saw in the larger framework.
By being aware of these biases and how they effect us, we can train ourselves to avoid them and minimize their influence on our work.
Share this article :
Labels: Business Analytics