What are you looking for ?
skip to main | skip to sidebar
Home » Software Engineering » Lesson-03

Posted by Wael.Medhat Posted on 10:37 am with No comments
Software Engineering ,
{[['

Businesses now operate in a global, rapidly changing environment. They have to respond to new opportunities and markets, changing economic conditions, and the emergence of competing products and services. Software is part of almost all business operations so new software is developed quickly to take advantage of new opportunities and to respond to competitive pressure. Rapid development and delivery is therefore now often the most critical requirement for software systems.

Software development processes that plan on completely specifying the requirements and then designing, building, and testing the system are not geared to rapid software development. As the requirements change or as requirements problems are discovered, the system design or implementation has to be reworked and retested. As a consequence, a conventional waterfall or specification-based process is usually prolonged and the final software is delivered to the customer long after it was originally specified.

For some types of software, such as safety-critical control systems, where a complete analysis of the system is essential, a plan-driven approach is the right one. However, in a fast-moving business environment, this can cause real problems. By the time the software is available for use, the original reason for its procurement may have changed so radically that the software is effectively useless. Therefore, for business systems in particular, development processes that focus on rapid software development and delivery are essential.

The need for rapid system development and processes that can handle changing requirements has been recognized for some time. IBM introduced incremental development in the 1980s (Mills et al., 1980). The introduction of so-called fourthgeneration languages, also in the 1980s, supported the idea of quickly developing and delivering software (Martin, 1981). However, the notion really took off in the late 1990s with the development of the notion of agile approaches such as DSDM (Stapleton, 1997), Scrum (Schwaber and Beedle, 2001), and extreme programming (Beck, 1999; Beck, 2000).

Rapid software development processes are designed to produce useful software quickly. The software is not developed as a single unit but as a series of increments, with each increment including new system functionality.

Although there are many approaches to rapid software development, they share some fundamental characteristics:


1-The processes of specification, design, and implementation are interleaved.There is no detailed system specification, and design documentation is minimized or generated automatically by the programming environment used to implement the system. The user requirements document only defines the most important characteristics of the system.

2-The system is developed in a series of versions. End-users and other system stakeholders are involved in specifying and evaluating each version. They may propose changes to the software and new requirements that should be implemented in a later version of the system.

3-System user interfaces are often developed using an interactive development system that allows the interface design to be quickly created by drawing and placing icons on the interface. The system may then generate a web-based interface for a browser or an interface for a specific platform such as Microsoft Windows.

Agile methods have been very successful for some types of system development:


1. Product development where a software company is developing a small or medium-sized product for sale.

2. Custom system development within an organization, where there is a clear commitment from the customer to become involved in the development process and  where there are not a lot of external rules and regulations that affect the software.

But because of the need for security, safety, and dependability analysis in critical systems, agile methods require significant modification before they can be routinely used for critical systems engineering.

In practice, the principles underlying agile methods are sometimes difficult to realize:


1. Although the idea of customer involvement in the development process is an attractive one, its success depends on having a customer who is willing and able to spend time with the development team and who can represent all system stakeholders. Frequently, the customer representatives are subject to other pressures and cannot take full part in the software development.

2. Individual team members may not have suitable personalities for the intense involvement that is typical of agile methods, and therefore not interact well with other team members.

3. Prioritizing changes can be extremely difficult, especially in systems for which there are many stakeholders. Typically, each stakeholder gives different priorities to different changes.

4. Maintaining simplicity requires extra work. Under pressure from delivery schedules, the team members may not have time to carry out desirable system simplifications.

5. Many organizations, especially large companies, have spent years changing their culture so that processes are defined and followed. It is difficult for them to move to a working model in which processes are informal and defined by development teams.

Another non-technical problem—that is a general problem with incremental development and delivery—occurs when the system customer uses an outside organization for system development. The software requirements document is usually part of the contract between the customer and the supplier. Because incremental specification is inherent in agile methods, writing contracts for this type of development may be difficult.

There are two questions that should be considered when considering agile methods and maintenance:


1. Are systems that are developed using an agile approach maintainable, given the emphasis in the development process of minimizing formal documentation?

2. Can agile methods be used effectively for evolving a system in response to customer change requests?

Formal documentation is supposed to describe the system and so make it easier for people changing the system to understand. In practice, however, formal documentation is often not kept up to date and so does not accurately reflect the program code. For this reason, agile methods enthusiasts argue that it is a waste of time to write this documentation and that the key to implementing maintainable software is to produce high-quality, readable code.

Agile practices, used in the maintenance process itself, are likely to be effective, whether or not an agile approach has been used for system development. Incremental delivery, design for change and maintaining simplicity all make sense when software is being changed. In fact, you can think of an agile development process as a process of software evolution. 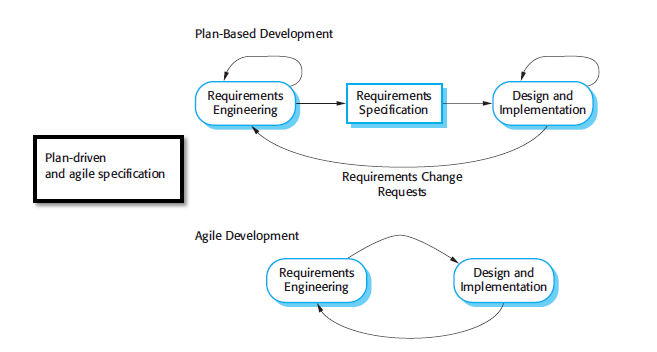 To decide on the balance between a plan-based and an agile approach, you have to answer a range of technical, human, and organizational questions:

1. Is it important to have a very detailed specification and design before moving to implementation? If so, you probably need to use a plan-driven approach.

2. Is an incremental delivery strategy, where you deliver the software to customers and get rapid feedback from them, realistic? If so, consider using agile methods.

3. How large is the system that is being developed? Agile methods are most effective when the system can be developed with a small co-located team who can communicate informally. This may not be possible for large systems that require larger development teams so a plan-driven approach may have to be used.

4. What type of system is being developed? Systems that require a lot of analysis before implementation (e.g., real-time system with complex timing requirements) usually need a fairly detailed design to carry out this analysis. A plan driven approach may be best in those circumstances.

5. What is the expected system lifetime? Long-lifetime systems may require more design documentation to communicate the original intentions of the system developers to the support team. However, supporters of agile methods rightly argue that documentation is frequently not kept up to date and it is not of much use for long-term system maintenance.

6. What technologies are available to support system development? Agile methods often rely on good tools to keep track of an evolving design. If you are developing a system using an IDE that does not have good tools for program visualization and analysis, then more design documentation may be required.

8. Are there cultural issues that may affect the system development? Traditional engineering organizations have a culture of plan-based development, as this is the norm in engineering. This usually requires extensive design documentation, rather than the informal knowledge used in agile processes.

9. How good are the designers and programmers in the development team? It is sometimes argued that agile methods require higher skill levels than plan-based approaches in which programmers simply translate a detailed design into code. If you have a team with relatively low skill levels, you may need to use the best people to develop the design, with others responsible for programming.

In reality, the issue of whether a project can be labelled as plan-driven or agile is not very important. Ultimately, the primary concern of buyers of a software system is whether or not meets their needs.
Share this article :
Labels: Software Engineering